We left last week's report, Carlsen - Anand II, the Second Week, with Carlsen leading +2-1=5 after eight games and four games to be played. Following is a summary of the week's events, from TheHindu.com.

The week's tally of +1-0=2 gave Carlsen +3-1=7, or 6.5-4.5. The match was over and Carlsen had retained his World Champion title for two more years. There was a controversial, newsworthy guest at the closing ceremony. 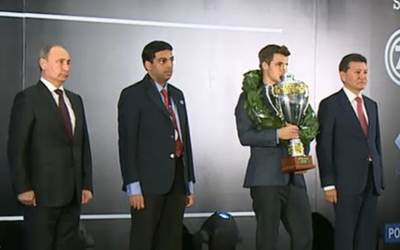 After congratulating the players, Vladimir Putin, President of the Russian Federation, said, 'This match was followed by millions of people. Chess is considered a great part of world culture.'

It was a great week for world class chess. Last week's report, Carlsen - Anand II, the First Week, left the match tied +1-1=2. During the seven intervening days, we had four games and three rest days, Carlsen taking the lead with +1-0=3 in the new games.

The overall score of +2-1=5 leaves Anand in a better position than at the same point last year (see Anand - Carlsen, the Second Week, November 2013), when the score was +2-0=6. In 2013 Carlsen won the ninth game and drew the tenth to clinch the title with two games left to play. In 2014, with four games remaining, Anand must win at least one game and draw the rest if he wants to take the match into tiebreak.

Here's a summary of the past week's events, presented by TheHindu.com, one of my favorite Indian news sources. Their chess correspondent is Rakesh Rao.

If I were responsible for the match, what would I change? Not much, with the possible exception of the press conference. I spent time reviewing all of the press conferences held since the opening ceremony and am relieved that they are not re-broadcast on mainstream, network television. The press officer in charge shows no enthusiasm, the players show no interest in communicating, and the assembled journalists show no desire to extend the proceedings. Here's a typical exchange from the session after game eight.

Q: You say you weren't in the best of shape at the beginning [of the game]. Could you elaborate? • Carlsen: No.

Is it any wonder that outside interest in the match is nil? I can understand that the players are tired after a long game and that they don't want to give information about their preparation, but the purpose of a sporting event is to provide some entertainment to the world at large. The entertainment value of chess press conferences is close to zero.

The introduction to the official videos usually features the logo that I captured in my 'C-A II, First Week' post. The animated sequence starts with chess pieces dropping on to an empty board, then the board morphs into the player's eye, then the eye morphs and rotates into the full logo. I managed to capture the board morphing into a player's eye.

That's more entertaining than the typical press conference that follows.

Posted by Mark Weeks at 5:33 PM No comments:

It was only two-and-a-half years ago, during the Anand - Gelfand title match, that watching live transmission of a high level chess match was a special treat: World Championship Chess on TV (May 2012). These days it has become commonplace.

Today the live video on the official site went down during the last portion of game four and the associated #c24live Twitter feed started filling up with 'live stream lost!' tweets. At least the tweets aren't filled with engine evaluations the way they were in the early days of live chat on the play sites. Come to think of it, there's not much difference between Twitter and live chat.

GM Peter Svidler and IM/WGM Sopiko ('Giggles') Guramishvili got off to a rocky start as official commentators. During the first games the GM would talk and talk and talk (no problem here; this is what he was hired to do) while the IM/WGM would giggle and occasionally interject an informed 'yeah'. Now there is some real back-and-forth between the two. The male/female, GM/IM contrasts work well provided that there is real interaction and some chemistry between the two commentators.

In the title match section of my previous post, 2014-2015 Grand Prix, Tashkent, I mentioned, 'I couldn't find an official logo' on the official site. The official videos start with the image that I've captured below. The eyeballs everywhere make it a little creepy, but it's better than nothing.

Coincidentally, after four games this year's match stands at the same equal score as last year's match, which I documented in Anand - Carlsen, the First Week (November 2013). Last year I mentioned

A Google News search on 'anand carlsen' has mushroomed to 'about 73.300 results'.

Kasparov: A Win For Carlsen In The Upcoming World Championship Match Will Be A Huge Win For The Chess World

-- hasn't happened. Carlsen got more press as a challenger than as a champion, the prize fund for the 2014 match is well below the 2013 match, and the Women's World Championship is in limbo. That's not what I call 'a huge win'. Chess's ragged outlook notwithstanding, I'm looking forward to the second week of the match.

Later: Here's a summary of the week's events as reported by TheHindu.com:-

Posted by Mark Weeks at 6:00 PM No comments:

The FIDE calendar says the last two Grand Prix events will be held February 2015 in Tbilisi, Georgia, and May 2015 in Moscow. This means that the entire Grand Prix cycle will have taken only eight months to complete.

I also added a link for the official site to my page on the forthcoming 2014 Carlsen - Anand title match, due to start in a few days. I couldn't find an official logo, so I used the image shown on the right.

The official site is a break from the normal look of FIDE sites. It tells us,

The look of the 2014 World Chess Championship, conceived by Pentagram, the famous design studio, stands out from typical chess events designs and represents an effort by FIDE to rebrand chess and make it more attractive for chess players and partners.

The site's schedule omits the starting time for rounds, but the TWIC page World Chess Championship 2014 tells us,

I haven't decided where I'll be watching the match, so I'll start with the official site.

Posted by Mark Weeks at 5:45 PM No comments: