News from the Catwalk

While most of the other top GMs have been slugging it out (so to speak) at the Shazam Candidates, vying for a crack at World Champion Anand, what has Anand's heir apparent, Magnus 'Catwalk' Carlsen, been up to? 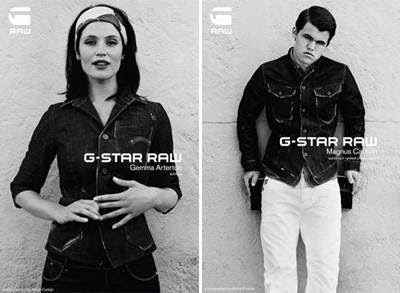 He's been plastered all over London!

Movie making may have filled Corbijn with a renewed sense of adventure, but photography remains his primary medium. His portraits of actress Gemma Arterton and chess champion Magnus Carlsen are plastered across the London underground in a new advertising campaign for fashion brand G-Star RAW and his latest musical collaboration is with Canadian band Arcade Fire, who he shot for a sixth time last November.

From Shadowplay: An interview with Anton Corbijn.

Posted by Mark Weeks at 1:44 PM No comments:

My request for further info in Zonal '?'s brought a number of helpful responses, some of them very detailed, which I'll tackle in a future post. One of the common threads across the responses was a summary of the qualification paths by players who qualified into the next stage, i.e. who qualified by what event into the interzonal (or knockout tournament). The best known overview of qualification paths is found on Glenn Giffen's zonal pages:-

Posted by Mark Weeks at 3:53 PM No comments:

I picked up a used copy of 'Meet the Masters' by Cathy Forbes (Tournament Chess, 1994) and was pleasantly surprised to discover that it was largely about the World Championship in the early 1990s. Mixed in with other luminaries, it has interviews with Keene, Fischer, Kasparov, Short, and Timman, plus Xie Jun; only Karpov is missing. I had already read Forbes' works on the Polgar sisters (Batsford, 1992) and Nigel Short (Cadogan, 1993), and knew that she was a keen observer of top level chess. For more about the author, see Cathy Warwick (née Forbes; Wikipedia); for a sample of her work, see Bobby Fischer, the Holy Grail - A Balkan Odyssey.
Posted by Mark Weeks at 5:16 PM No comments:

A few weeks ago I linked my index of World Championship Zonals to my pages on the various interzonals (see 'Chess Results' by Gino Di Felice), so it seemed appropriate to make the round trip. I linked the main index page for the World Chess Championship, plus the page on FIDE Events 1948-1990, to the clipping pages for the various zonal cycles.

While I was at it, I added a few doodads to my page on the 2011 Candidates Event, which gets underway this week. I also added a new page for the forthcoming 2011 World Cup. FIDE has said so little about this event that I suppose they are still hammering out the details of the new cycle.

The May 2011 Chess Life (CL), has an interview titled 'Kamsky on the Record' (p.30), where the USA's second ranked GM mentioned something that didn't seem right to me. Here is an excerpt of the passage, with my apologies for treating it like an image. The editor of CL recently eliminated the HTML version of the magazine and I haven't figured out how to do a text copy/paste.

The sentence that caught my attention was Kamsky saying, 'I was supposed to play the World Champion for the title', where he was talking about his December victory in the 2007 World Cup. According to my page on the 2008-09 Matches, FIDE had already announced in July 2007 that the winner of the World Cup would only get a World Championship match if Kramnik won the double round robin title event at 2007 Mexico City. Anand won that event in October 2007, well before Kamsky won the World Cup. There was never any question of Kamsky playing a title match without first winning an intermediate match.