This being the last post of the old year, let's set some goals for the new year. I did this nearly three years ago in Small Projects for 2015 (January 2015), and actually managed to accomplish all of them. Perhaps I haven't needed specific objectives since then because of the blog follow-up list: Posts with label zFLUP. Some of the most prominent small projects on that list can be done in small chunks whenever I have some free time:-

'Small Projects for 2015' included updates for both the World Correspondence and World Computer championships, two topics that I tend to forget. Comparing the last time I looked at the first topic, Correspondence Chess 2016 (May 2016), with the current situation reveals two events in progress, neither of which requires immediate attention:-

As for the second topic, one event has taken place since I looked at the 22nd World Computer Championship (August 2016). Details are on the home page for the ICGA : International Computer Games Association; see especially the post by David Levy, dated 19 June 2017.

On top of those World Championship subjects, I have two technical problems to address. The first is a replacement for my old FTP package. It ran under my browser, but was deemed obsolete after the browser's last major software update. My ISP's 'File Manager' is adequate for small updates to the site, but is too clunky for large updates. The second is a replacement for my old PGN normalization software, which was forcibly retired last summer. I added two recent events without including the corresponding PGN:-

Updates to the correspondence and computer championships will also require PGN normalization.

Posted by Mark Weeks at 5:01 PM No comments: 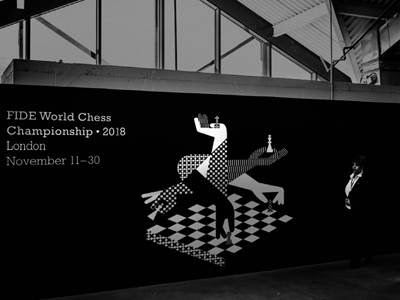 Posted by Mark Weeks at 5:58 PM No comments:

I created a new page for next year's World Championship, currently titled 2018 Carlsen - TBA. The page is only a stub with a link to the official site (available a year in advance!) and a link to the announcement of the venue. That Fide.com page said,

Why create the new page only a month after creating one for the candidates tournament, 2018 Candidates, Berlin, which will be held in March? Because I expect that there will be some controversy surrounding the London match and I wanted a permanent place to record it. With announcements coming variously from Agonlimited.com, Fide.com, and Worldchess.com, it is difficult to keep track of World Championship news.

According to yesterday's post on my main blog, FIDE's Journalist Commission 2017, an 'official website' should have a domain name like hostcity20xx.fide.com. Using 'london2018.fide.com' produces a message 'can’t connect to the server'.

Posted by Mark Weeks at 5:47 PM No comments:

After finishing the previous post, 2017 Grand Prix, Palma de Mallorca, I added the latest Grand Prix series against the names of all 24 players on the World Chess Championship : Index of Players. The chart on the left lists the names of those players along with the number of points they scored over the three events (of four total) in which they competed.

As you might expect, the 24 players were already listed on the 'Index of Players'. For GMs Hammer and Rapport, it was only their second appearance in a World Championship event, and for GM Riazantsev it was his third.

My page on the 2017 Grand Prix shows that GMs Mamedyarov and Grischuk qualified into the forthcoming 2018 Candidates Tournament (congratulations to both!), while the chart on this post shows how close was the race in terms of points scored.