The postcard shown in the image is from eBay auction CHESS, Tournament in Palma De Mallorca, Bobby Fischer. 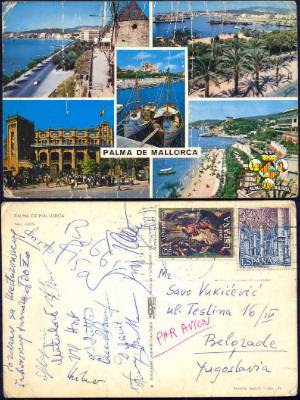 The auction description said, 'Chess, International tournament in Palma De Mallorca, original autograph, Chess masters: Bobby Fischer...' This was the 1970 Palma de Mallorca Interzonal Tournament, which Fischer won by 3.5 points and which launched him into the Candidate Matches that would eventually lead to the 1972 title match with Spassky.

Fischer's autograph is clearly visible in the top center of the card's message area. The other signatures are from other participants in the interzonal and are easily identified in the high resolution scan linked from the original auction. The card sold for US $462.88.

Posted by Mark Weeks at 9:33 AM No comments:

Following up World Championship Widgetitis, I had the idea to turn the Amazon.com widget into a bibliography. First I made a list of titles at hand, ordered by the year of the first event covered and the author.

It's not perfect, but it's a start.

The motivation for the two widgets is related. I wanted to add book titles about the World Championship to Mahalo, but their tool, which drags in everything related to the search phrase from Amazon, returned more junk than useful titles. Example: 'World Chess Championship Matches, Vol 2' and 'World Chess Championship Matches. Book 2', both by Berdichevsky, were two separate entries. Then there were three entries for the book on the 1951 Botvinnik - Bronstein match by Wade and Winter.

My problem with widgets is that they often slow down the loading of the page, sometimes to a crawl. If people are going to wait for a page to load, they might as well get something useful.

As long as I've touched on the subject of Berdichevsky, I've sometimes wondered what exactly are these books, spanning three volumes. Schachversand.de has pages on World Chess Championship Matches for Vol.1, Vol.2, and Vol.3, but the reviews are somewhat brief and in German. The preface for Vol.2, written by Smyslov, says,

Here, for the first time, have been collected together all the annotated games of all the matches for the world championship matches between 1886 and 1998. Apart from being an encyclopedia, this work also has considerable instructional value, since at all times people have learned primarily from the games of the champions.

'All the annotated games of all the matches for the world championship'; that's a lot of annotations.

Posted by Mark Weeks at 4:25 PM No comments:

A few days ago I noticed that Mahalo.com's World Chess Championship topic was available, so I signed up for it. I haven't done much with the page yet, except to clean and correct the info that was already there. See the new widget at the bottom of this page for links etc.

I also signed up for Mahalo.com's Fischerandom topic. Contributors are only allowed two topics each, so I've reached my limit. I'll update the Mahalo pages at the same frequency I update my related blogs, which is once a week.

Later: I worked on the two topics over a period of 2-3 weeks, became frustrated with the tools, and abandoned the effort. It took Mahalo about six months to open the topics for someone else.

Posted by Mark Weeks at 4:25 PM No comments:

There is a case to be made for including the tournaments at Groningen 1946 and Prague 1946 in any comprehensive list of World Championship qualifying events. From 'Najdorf: Life and Games' by Lissowski et al (p.27):-

If the winners of the tournaments in Groningen and Prague are not among the six above-mentioned masters [Botvinnik, Keres, Smyslov, Reshevsky, Fine, & Euwe], they shall play a match in Prague organized by the Czechoslovak Federation under the auspices of FIDE. The winner of that match shall be added to the list of participants. If one of the winners is already on the list of participants, the other shall automatically qualify.

Running ahead, we may say that this clause was of direct concern to Miguel Najdorf, and that it was virtually the only one to be repudiated later -- as a clear result of actions behind the scenes by the most influential countries in the chess world.

Posted by Mark Weeks at 4:36 PM No comments: