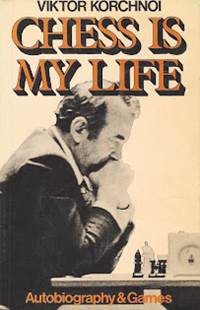 On my main chess blog, I've already mentioned Korchnoi's autobiography 'Chess Is My Life' (Batsford 1977) in a post about Korchnoi's Defection. There is also much in the book relevant to Korchnoi's World Championship career, pre-1977.

Of particular interest is Korchnoi's mention of five consecutive USSR championships that served as zonals (or in one case as a zonal qualifier). In two of the zonals the future World Championship challenger was successful in advancing to the Interzonal stage. Here are the five events with links to my page on the cycle and page references to Korchnoi's book.

Also of particular interest is Korchnoi's discussion of the 1964 zonal. I've already included an introductory clipping on my page for the C06 cycle, but would like to add a transcription.

After the [USSR] Championship, a special Zonal Tournament was arranged, as a qualifying event for the Interzonal. It was to be made up of the six highest placed in the Championship, plus two personally invited players (on the basis of previous successes). The seventh particpant named was Smyslov, who had not taken part in the Championship (it was for his sake that this whole system had been thought up), and for the eighth the Chess Federation nominated me.

Literally a few days before the start of the tournament there was a surprising turn of events. Smyslov put in an application to the Federation, requesting that he be allowed to have one of the four USSR qualifying places and go directly into the Interzonal. The Federation rejected his claim. He then turned to his friends with access to the Government and leading Party Organs. From there -- from above -- came an order which was un-conditionally accepted by the USSR Sports Committee, and the head of the Chess Federation (at that time Rodionov) was reprimanded.

From this incident the reader can gain an idea of the bureaucratic hierarchy of the heads of sport, in particular of chess.

The USSR Chess Federation, a public organ with the right of consultative vote, is controlled by the USSR Sports Committee. Supervision of the activities of the Sports Committee is carried out by corresponding departments in the Communist Party Central Committee. Even higher, in the Communist Party Central Committee's Politburo, there is a man who is responsible for sport, including chess. At that time this man was the present Minister of Culture (demoted from the Gods to a mere mortal!) Demichev. Evidently it was he who heeded Smyslov's call, and in an instant decided the matter in favour of the capricious grandmaster.

There was no limit to the indignation of the competitors in the Zonal Tournament. It was decided to call a strike and refuse to play. However, the strike was vetoed by Spassky (strongly influenced by Bondarevsky). With such a small number of participants it had to be unanimous and as a result the conspiracy broke up. A pity!

Knowing about this incident, chess followers will now be able to guess why, at the Biel Interzonal Tournament in 1976, Kuzmin was replaced by Smyslov.

In the C07 cycle, Korchnoi advanced to the final stage of the 1967-69 Candidates Matches, thereby qualifying for the Candidates stage of the following cycle. He remained in World Championship cycles through 2001.

Posted by Mark Weeks at 5:15 PM No comments:

The previous post, Worldchess Newsletter, brought to mind 'the attempt by Agon, the organizer of the Moscow [Candidates] event, to restrict broadcasts of the tournament'. Here's a different approach.


Malcolm Pein On Limiting Chess Broadcast And Moves (5:03) • 'IM Malcolm Pein, organizer of the Paris and London tournaments in the Grand Chess Tour, explains why their video broadcasts and chess moves are shared without cost to chess websites.'

About one minute into the clip, IM Pein says,

Having an association with Vivendi Dailymotion games enables us to use a platform to put all these different streams and make them available to everyone. Previosly this would have been extremely difficult to do and would have required a huge amount of money. With Dailymotion games we can put all the video streams in one platform, put all the commentary streams in one platform. We have 23 cameras in the hall so people can just look at whatever they want.

Now I know that the 'secret to the sauce' is Vivendi Dailymotion.

Remember Worldchess.com? I had almost forgotten about the site until I received an email a few days ago announcing a newsletter. The site has apparently leveraged its signup procedure -- mandatory to watch any live action on the site -- into a periodic communication. It started,

This is the first newsletter from WorldChess.com, the official web site of the World Championship cycle of events. This is a monthly newsletter that contains information that we hope you will find interesting and useful.

I mentioned the site in March, in a couple of posts on the Moscow Candidates:-

The newsletter's first link was to a video that I featured last month on my main blog: We Will Be Agog!, 'Making of the World Chess Candidates Tournament'. Other links eventually led me to the site's page on the forthcoming title match.

'I and all New Yorkers welcome the World Chess Championship back to New York City. What better place to be than the city where parks are often populated by chess enthusiasts!' — New York Mayor Bill de Blasio

I'm following this match on my own WCC page 2016 Carlsen - Karjakin. The newsletter also introduced a series of articles titled History of the World Championship by Tim Harding:-

The same author, perhaps best known for his detailed histories of correspondence chess, wrote a shorter series titled History of the Candidates:-

In WCC Part I, Harding writes of the 1886 match, '[Steinitz] won the 19th and final game on March 24 in only 19 moves'. This statement received a comment, 'I thought that the match lasted 20 games, not 19. The Steinitz Gambit was game 20 to end the match.' My own page, 1886 Steinitz - Zukertort Title Match, gives 20 games. Is there a controversy here that I haven't seen before?

Posted by Mark Weeks at 5:51 PM No comments:

After the passing of Viktor Korchnoi at the beginning of the week, a post about him on this WCC blog is mandatory, but also problematic. Mandatory because of his long record of participation in WCC events, as in World Championship Stalwarts (October 2015 on my main blog: 'GM Korchnoi heads the list'); problematic because of the often controversial nature of his participation, as in A Rigged Match? (November 2009).

While my main blog probably focuses more on chess personalities, as in yesterday's post My Two Encounters with Korchnoi, this WCC blog is more about events. Here is an image I picked off eBay back in its early days. It depicts another controversial event. 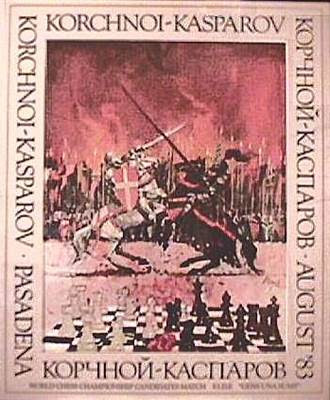 The quality of the image isn't great, but the elements are readable. The eBay description said,

SIGNED MATCH POSTER BY VIKTOR KORCHNOI. This is an item of great historical chess significance. This is the official match poster from the aborted Viktor Korchnoi versus Garry Kasparov Candidates semi-final match in Pasadena, August 1983! Kasparov never showed and Viktor was left sitting for an hour and won the forfeited match which was later re-played(!) in England. Korchnoi was paid twice!

This is a beautiful framed mounted poster with a glorious painting as the back drop. The chess position is taken from the famous game between the two played at the Olympiad (if I remember the tourney correctly) prior to the match. Gazza won a beautiful game that Korchnoi was winning at one point. The border has their names in English and Cyrillic. Korchnoi has signed on 8/17/99 on the lower right in Cyrillic.

Where is Korchnoi's signature? In those days I 'cleaned up' the images I saved, so I probably deleted it. In any case, my file holding the image is dated 26 April 1999, but the description says it was signed 17 August 1999, so something is amiss.

Posted by Mark Weeks at 5:39 PM No comments:

The mention of a page on the 1972 Caorle zonal (FIDE zone 1) in My Name in Bytes led to an index page on ChessScotland.com: World Championship - Zonal Tournaments.

Under the earlier format of qualification tournaments used to find a challenger to the World Champion, several Scottish players took part in Zonal tournaments. Here is a selection of these events.

That index page currently leads to pages on eight zonals held between 1951 and 1975. There is also a separate page for each of the Scottish participants in those events.

Whenever I work on my own zonal pages, I spend most of my time looking for events where I'm missing basic documentation. What about looking for events where I already have a full crosstable? I used this idea to search on the two winners of 1972 Caorle -- Ljubojevic and Ivkov -- and discovered a number of promising leads. An example from my own backyard is Belgian Chess History - Zonal Tournament.

Although I could do the same search on all of the documented zonals, there are more than 400 such events. Is there a way to prioritize these? How about searching for events where I have less than a full crosstable? Using 1969 Mar del Plata as an example -- an event won by Najdorf and Panno -- I couldn't find a crosstable on the web, but I didn't spend much time on it.

This idea is worth pursuing, but first I have to catalog events with less than a full crosstable. Such a list would also be useful for a library visit.

Posted by Mark Weeks at 5:45 PM No comments: