I added match crosstables and PGN game scores for the 2007 World Cup and updated the Index of Players. I count 45 players who participated in a World Championship event for the first time.
Posted by Mark Weeks at 5:49 PM No comments:

Match News for the Current Cycle

A few days later, details of the Anand - Kramnik match were announced: World Chess Championship Match 2008, Anand vs Kramnik (Fide.com). The press release was on the Chessbase.com site well before it was on the Fide.com site. The match will be a title match, with Anand the champion and Kramnik the challenger.

The Kamsky - Topalov match will be played sometime after the Anand - Kramnik match. I assume the timing is to know the identity of the champion before knowing the challenger. Has there ever been a series of title matches where the challenger was known before the champion?

Here are the 'Overall records' of the four seeded players according to Chessgames.com:-

There is no word from the Anand camp on the resolution of the reported blocking points : venue in Germany and draw odds. Both were resolved in favor of Kramnik.

Posted by Mark Weeks at 3:55 PM No comments:

Continuing the evolution of my project on the zonals...

...I've collected many photocopied articles documenting the results of the individual events. For the past few months I've been considering how I should handle them, and I decided to use the photocopies the same way I would paste clippings into a workbook. A later step would be to transcribe the scanned images to a machine readable digital format with the parallel goal of collecting PGN game scores, then using those to produce crosstables.

The first zonal cycle is here...

It's primitive, but I don't want to be locked in by too many design decisions at this early stage.

Posted by Mark Weeks at 1:16 PM No comments: 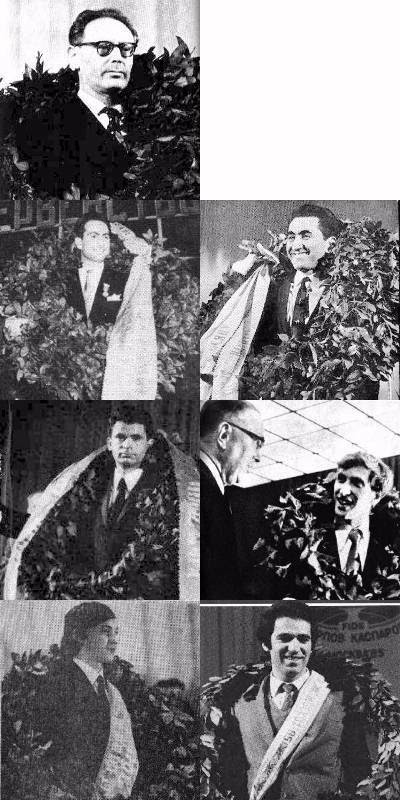 Posted by Mark Weeks at 2:07 PM No comments: