Merry Christmas! from a Family of Blogs

This year Christmas Day coincides with World Championship blogging day. The last time this happened was World Championship Chess on Christmas (December 2013), six years ago. Since all dates advance by one weekday every year -- except on leap years, where they advance two weekdays -- and since there was one intervening leap year after that 2013 post, the six year gap is entirely copasetic. In 2013, I wrote,

My first idea was to identify World Championship games that took place on 25 December. I thought of three events that fell over Christmas. 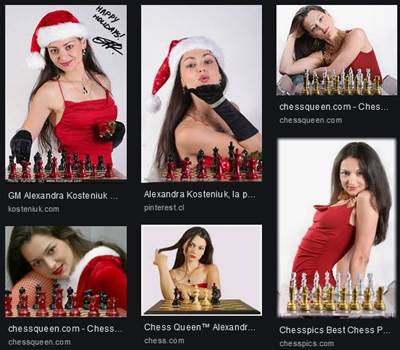 It turns out that I've already mentioned ('Sorry, Alexandra!') the 2008 Women's World Champion -- see 2008 FIDE Knockout Matches, 'Nalchik (Kosteniuk 1st)', for details -- in pre-Christmas post Mele Kalikimaka!, that time on Christmas Eve. After Pictures of Pia (December 2019), that makes twice in one month that I've based a post on photos of a top woman player.

Here's wishing a Merry Christmas! to all those who celebrate the day. • To follow the complete chain of previous Christmas posts, see A Cropped Christmas (December 2018), and please continue to drive safely...

Posted by Mark Weeks at 5:29 PM No comments:

I ended my first post on the current Women's Grand Prix, titled Status of the Women's World Championship (October 2019), with:-

I'll wait until FIDE has published the necessary documents before I tackle the new cycle.

The second event in that Grand Prix, held in Monaco, has ended and there is still no sign of documentation covering the full cycle. One page on the Women's Grand Prix, About and Schedule — FIDE Grand prix 2019, says,

The two (2) players who score the most number of cumulative points in WGP Series qualify to the FIDE Women Candidates Tournament to be held in the first half of 2021.

The FIDE handbook still points to the document for the previous cycle, which does not mention a FIDE Women Candidates Tournament. To help anyone who happens to consult my page on the World Chess Championship for Women, I added a link to 'Label : Women' on this blog.

The third leg of the Women's Grand Prix will take place at Lausanne in March 2020. Will the necessary documentation be available by then?

Next month, January 2020, we will see the final event in the previous cycle, a title match between Ju Wenjun and Aleksandra Goryachkina. This will be the first event occurring under the WADA restrictions that I documented in the previous post, WADA Ya Know. I'm not expecting anything dramatic to happen, given the short time since the WADA restrictions were announced.

For anyone who understands the deep connection between chess and Russia, the first notification was a bombshell:-

FIDE, a signatory to WADA's 'International Standard for Code Compliance', reacted within a few days:-

This was immediately followed by a call for a special Assembly and Congress:-

2019-11-29: General Assembly and FIDE Congress: dates & venue (fide.com) • 'The Presidential Board made a final decision about the place and dates of an Extraordinary General Assembly and FIDE Congress. In response to a number of requests from delegates, and taking into account the opinion of the Chairman of the Constitutional Commission, Mr. Rivello, the Board scheduled the Assembly on February 26-29 in the United Arab Emirates. The final agenda will be published no later than one month before the date of the meeting, according to the Statutes.'

The formal confirmation of WADA's recommendations came a week and a half later:-

I put together the following chart showing events on the FIDE calendar scheduled in Russia for 2020, plus an overview of Russia's position as a leading chess nation (1st) and the top Russian players.

There are a number of points to watch: FIDE management (esp. FIDE President Arkady Dvorkovich, who was Deputy Prime Minister of Russia from 2012 to 2018), scheduled FIDE events, future FIDE events, and top Russian players. All of this taken together will become the follow-up to last year's 2018 FIDE Congress : Whither the World Championship? (January 2019). If we are going to follow this evolving story, current FIDE management will need to improve its communication skills and work on its lack of transparency.

Later: After I wrote the post, I discovered that there was no apparent connection between the WADA issue and the 'call for a special Assembly and Congress'. For more about the latter, see Spectating the 90th FIDE Congress? (February 2020).

Continuing with the zonals++ for the current cycle, the previous post in the series, C29 Zonal Clippings (November 2019), promised, 'The next step will be something like C28 Zonal Qualification Paths (November 2017), this time for C29.' Most of the C29 preparation was done for the first post in the series, C29 Regulations for World Cup Qualifiers (September 2019). Building on this, I created a new page Zonal Qualifiers 2018-2019 (C29), and linked to it with:-

While I was doing these tasks, I noticed that there were significant differences between the 128 players listed as 'World Cup Qualifiers' and the 128 players who actually participated in the World Cup. I created the following chart to identify the differences.

Left: Qualified, but didn't play
Right: Played, but not on list of qualified players

Unfortunately, I didn't have the time to go further with the comparison. If I ever continue with the idea, I might also try to apply it to the players listed on Zonal Qualifiers 2016-2017 (C28). Ditto for previous cycles.

Later: Here are a couple of notes on the chart.

Re zonal 3.6, 'Illingworth Max (AUS)' was replaced by 'Press,S'. See Shaun Press's Chessexpress blog post, Lots of travel for a bit of chess (August 2019) for more info like:-

GM Max Illingworth was the original representative from the Oceania Zone, by virtue of winning the 2019 Oceania Zonal. However, due to personal circumstances he was unable to attend the World Cup, which meant the runner up could go in his place. I was the runner up!

The blog also has followup reports posted during the World Cup, like White in the first game (September 2019). Earlier reports from the zonal tournament, like 2019 Oceania Zonal (February 2019), were also posted on the blog.

Re 'Nominees of the FIDE President', the qualification of 'Salem A. R. Saleh (UAE)' prompted me to include '3.1e Dubai (UAE) 2018-11' in the list of zonals. Since the player wasn't replaced by another competitor in the tournament, this might have been unjustified speculation on my part. To be confirmed.

Even later: From an announcement on Fide.com, Players qualified for the World Cup 2019 - Average ELO & ACP Tour (July 2019), after 18 players qualified by 'Average Rating' there were five players listed as 'Reserve':-

All of those players participated in the World Cup. Looking at the six players still unaccounted for, two had ratings around 2700, which was the approximate cutoff point for the listed reserves:-

The other four players were relatively young with ratings in the low 2600s ('B-Year' from ratings.fide.com):-

I imagine that these players were nominees of the authorized FIDE representatives.

The last word(?): The Wikipedia page for the event, Chess World Cup 2019 (wikipedia.org), has a section titled 'Qualification paths', which ties all of the loose ends together.

Posted by Mark Weeks at 5:27 PM No comments: