For photos from the World Junior Championship, see 2008 world young championship, from which the following is taken. 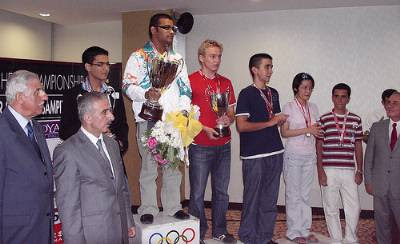 I assume it's a photo of the prize winners from the men's competition.

Because it's a tense situation which is still evolving, it's perhaps better to say nothing about the controversies surrounding the World Women's Championship. Unfortunately, the FIDE reaction to Appeal to FIDE: move the Women's World Championship (follow the links for the reactions) defies belief: FIDE President Ilyumzhinov: 'Do not mix politics and sport'; ECU President Boris Kutin: 'mixing politics with sports is clearly against the spirit of the international chess community'; Ilyumzhinov: 'It is not [the organizers'] fault that blood was shed.'

When Ilyumzhinov was abducted by extraterrestrials (see my Elsewhere on the Web, Kalmykia, 'The Home of World Chess'), did they erase his memory of FIDE sanctions against South Africa, or of the 1972 Munich Olympics massacre? Even so, that doesn't explain Kutin's response. The players' safety, security, and peace of mind cannot be dismissed with weasel words.

People having longer memories than chess politicians might remember that in 2004, FIDE managed to move the venue of the World Women's Championship under similar, even less dangerous circumstances (see Elsewhere on the Web World Championships Galore). Future chess officials seeking executive position should be checked for the presence of a heart. The presence of a brain is clearly asking too much.

See also Chessbase.com's July report Women's World Championship in Nalchik, showing the geography of the region, and their more recent report Ilyumzhinov reiterates: we should not mix sport and politics, with reader comments. • For my previous posts on the event, including other changes of venue (Prague -> San Luis -> Iran -> Istanbul) see Women's World Championship 2008 [10 April 2008], and Women Put Kabardino-Balkaria on the Chess Map [11 June].

I added the crosstable and PGN for the recent Grand Prix event at Sochi to my page on the 2008-2009 Grand Prix.
Posted by Mark Weeks at 11:35 AM No comments:

World Championship Interzonals : Leningrad and Petropolis 1973 by Wade, Blackstock, and Kotov has full crosstables for all zonals in the 1972-75 cycle. The additional info includes a zone 4 playoff missing from Soviet Zonals 1951-87.
Posted by Mark Weeks at 9:47 AM No comments:

'Pursuant to this Agreement...'

My first Web related task after Bye, Bye, About.com! was to delete the About.com links from my World Championship site.

These were originally created because of a contractual requirement 'to place a link to [About Chess] on Guide's existing site, if one exists'. It takes only a few minutes longer to place them on all pages rather than a single page, so that's what I originally did. The links produced a fair number of clicks into the site, consistently in the top-5 of external sites.

Removing the links was the first global change to the site since Round Trip Complete, when I added the links to this blog. While I was testing the change I was reminded that two other internal links in the header -- Highlights and Best games -- haven't been updated in years. Now that I have more free time, I should be able to tackle them in the coming months.

My page on 2004-05 Unification, which contains links to my material on About.com is going to be a problem. If I can't get permission to reuse the different posts, I'll have to come up with something else.

Posted by Mark Weeks at 9:33 AM No comments: