Does the general public recognize the names of World Chess Champions? For Garry Kasparov, I have anecdotal evidence that, 'Yes!', they do. For Magnus Carlsen, I'm not so sure. How about recognizing their faces? I can't answer that question easily, but I can run their photographs through the sort of AI software I discussed last week on my main blog in Analyze Your Own Images. If AI doesn't recognize them, then non-artificial intelligence probably won't either.

The software I used is available through Vision API - Image Content Analysis (cloud.google.com/vision). I used another Google service, image search, to locate a studio portrait of GM Kasparov, then fed it to the Vision API. The 'Faces' section of the analysis returned the image shown below on the left, while the first item in the 'Web Entities' section told me 'Garry Kasparov 10.947', where the number is probably some kind of a confidence metric. The second item was 'Chess 1.06755' and the last was 'Bobby Fischer 0.09179'.

The 'Pages with Matched Images' section returned a long list of links, most of them from Pinterest.com, including a link to the same image I used for the test. No question about it, Garry Kasparov has both name and face recognition. 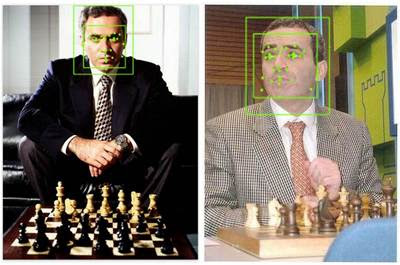 While I was conducting that test, it occurred to me that the Google AI software might be cheating. It could easily locate copies of the image in the Google archive of results from web searches, then analyze the associated text.

I searched my own archive of images and located one that might not have found its way to a web page somewhere. I fed this one to the Vision API and it returned the image shown above on the right, along with 'Garry Kasparov 10.2885'. There's no doubt about it -- the API recognized Garry, and this time 'Pages with Matched Images' was empty.

One more curiosity is worth mentioning: the analysis of both photos returned the following list of face attributes:-

It seems that AI software can recognize Kasparov's face, but it can't recognize his expression.

Start with the format used in Imagery of 1889 Steinitz - Chigorin, then fast forward more than a century to Chess at the World Trade Center. You end up with something like the following.

First observation: There is nothing from Pinterest (Thank you, Google!), although there is plenty from Youtube (A2, A5, B5, C1, C4). Second observation: There are also plenty of similar aerial photos showing New York City (A1, B3, B4, B5, C5). Given that there is not a real position on the board and no clock. this was probably a publicity shot.

The 'Intel World Chess' logo figures in many photos (A4, A5, B1) and is partially obscured in others. In A4 -- Kasparov vs Anand, 1995 (kasparov.com) -- the word 'Intel' is cropped out on the top, though a smaller version is visible on the bottom; ditto A5.

Two more photos (A2 & B2) are from the match and show arbiter Carol Jarecki. A2 is from a Youtube video, Kasparov - Anand, Game 10, World Championship 1995, that includes footage taken during the match plus game analysis by Daniel King. In B2, NYC mayor Rudy Giuliani makes the first move.

Nearly all of the images on the third row are from other Kasparov - Anand encounters. C1 is titled 'BLITZ Intel World Chess 1995'; C2 is from a Spanish tournament (Linares?); and C3, dated August 2017, says 'Saint Louis Rapid & Blitz'. C4 is from another Youtube video, although the image returned by Google is not in the clip.

Posted by Mark Weeks at 5:48 PM No comments:

Chess at the World Trade Center

I found this image while preparing a recent post, Chess in The Graphic, on my main blog. 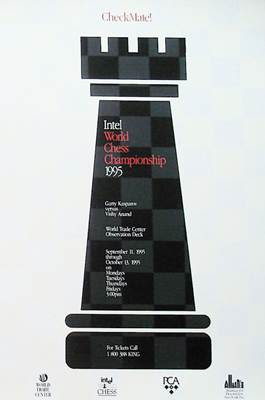 Under the heading 'Checkmate!', the text says,

The four sponsors listed at the bottom are

For the history of the PCA (Professional Chess Association), see my page World Chess Championship : FIDE/PCA Chronology. I've documented the event shown in the poster on the page 1995 Kasparov - Anand PCA Title Match.

Just above the name for that last sponsor, 'Alliance for Downtown New York Inc.', is a logo composed of buildings that appear to say 'Alliad', where the two letters 'll' represent the twin towers of the World Trade Center. The group's LinkedIn page, Overview ('Nonprofit Organization Management'), shows a similar but different logo that spells 'Alliance'.

I found the image in an August 2007 eBay auction. The auction description said,

The connection between my post about 'Chess in The Graphic' and this poster is the phrase 'ROOK GRAPHIC'. From such connections little discoveries are made.

Posted by Mark Weeks at 5:00 PM No comments:

Three of the images (A1, C3, & C4) show the same setting and appear to be taken from the 1889 match; the first version is from Steinitz vs Chigorin 1889 (chessgames.com). The large text image (C5) is from my page 1889 Steinitz - Chigorin : Background, which is a collection of clippings from issues of British Chess Magazine in the 1880s.

Two more images (A3 & A4) are said to be from the rematch 1892 Steinitz - Chigorin (Havana). Another image is shown twice (A2 & B1), where the second version includes a caption, 'Petersburgo 1896: M.Chigorin, E.Lasker, H.N.Pillsbury, W.Steinitz'. The other images have little to do with the 1889 match.

Back to the only image from the 1889 match (A1 etc.), none of the sources identified the origin of the image or the other six men behind the chess table. More information about the photo can be found on another page, Échecs à Cuba -- 500 ans d'histoire (europe-echecs.com), by Georges Bertola.

Posted by Mark Weeks at 5:12 PM No comments: