The Road to the World Championship (Part III)

In three previous posts I overviewed the qualification cycle for the World Chess Championship:-

Let's take a closer look at the first segment of the road, the Continental Championships. This year's events are the first qualification stage for the next cycle -- the 27th since 1948, according to my numbering -- and should culminate in a title match some time in 2016. The FIDE calendar currently offers the following information for 2014.

More detailed info should be available on the web sites for the four continents.

For example, the site for the European federation currently offers a downloadable document which mentions the following.

3. PARTICIPATION • The European Individual Chess Championship is open to all players representing Chess Federations which comprise the European Chess Union (FIDE zones 1.1 to 1.10) regardless of their title or rating. There is also no limit in the number of participants per federation; however applications have to be sent by the national federations only.

4. QUALIFIERS • The European Individual Championship 2014 is a qualification event for the next World Cup. According to FIDE regulations and the decision of the ECU Board, 23 players will qualify.

5. SYSTEM AND RATE OF PLAY • The championship will be organized in 11-round Swiss system in accordance with the ECU Tournament Rules and FIDE Laws of Chess.

6. TIE-BREAK SYSTEM • The order of players that finish with the same number of points shall be determined by application of the following tie-breaking procedures [...]

I couldn't find the equivalent info on the other three continental web sites, which I suppose will be updated in good time. I noted one new point on the site for Africa. Under 'DIRECTORY' it lists zone 4.4 with ten countries, but my history of the zonals has never seen higher than African zone 4.3. The FIDE Handbook, 01. World Championship General Provision, confirms the zone numbering, but allocates no 'Men's places' or 'Women's places' to the new zone (ditto for zone 1.10; is this also new?). TBD...

Posted by Mark Weeks at 5:44 PM No comments:

The Road to the World Championship (Part II)

In my previous post, The Road to the World Championship (Part I), I outlined the gauntlet of chess tournaments that a strong player endures to become World Champion. The sequence starts with tournaments restricted to players in different geographical regions.

The following table, from my page on the World Chess Championship Zonals, shows the Continental Championships and zonal tournaments which were held for the cycle currently in progress. According to my numbering, it is the 26th such cycle since FIDE took control of the World Championship in 1946, and will culminate in a title match later this year.

Zone numbering in the left column (e.g. 2.1 for the USA) follows the FIDE assignments for zonal tournaments, except for zones numbered 'x.0' (e.g. 1.0 for Europe, where the '0' is my own convention), which are Continental Championships. For the current cycle, the table shows two Continental Championships each for Europe (1.0), the Americas (2.0), and Asia (3.0); and one for Africa (4.0).

Posted by Mark Weeks at 3:13 PM No comments:

The Road to the World Championship (Part I)

While I was chatting this week with a Facebook friend who also happens to be a FIDE insider, he convinced me that not everyone understands what it takes to become World Chess Champion. Looking at it another way, suppose I wanted to become World Champion. Ignoring the obstacle of playing chess well enough to even dream about it, what competitions would I have to enter to have a crack at the title?

The first place to turn for further info is Fide.com, where under 'Handbook : D. Regulations for Specific Competitions', we find D.I. Cycle for the Individual World Championship. The first six chapters are

A. National Championships which are the responsibility of the member-federations of FIDE. The national federations retain all rights in their internal competitions.

B. Zonal Tournaments which can be organized by the Continents according to their regulations which have to be approved by the FIDE Presidential Board.

D. FIDE World Cup: organized in accordance with the published regulations on the FIDE website (link).

There are further paragraphs for E. FIDE Grand-Prix, F. FIDE Candidates Tournament, and G. FIDE World Championship Match, which I'll ignore for now, because they are later in the cycle. The 'General Provision' document also lists the member countries of FIDE (177 of them at this time), split into 'zones' along with a number of qualifying places per zone.

Those qualifying places aren't explained. You just have to know that they relate to the number of places available for the FIDE World Cup. The roles of National Championships, Zonal Tournaments, and Continental Championships are explained in the 'Regulations for the World Chess Cup':-

This is all a little confusing, but at least you know that your qualification depends on the continent where you live. The regulations for each continent are available on other web sites. Those sites are linked from FIDE's page on the Presidential Board (PB), because the four Continental Presidents are members of the PB.

I'll look at the continental regulations in part II.

Posted by Mark Weeks at 5:53 PM No comments:

Che Guevara at the Havana Zonal

Judging by the amount of email I receive on the topic, my page on the World Chess Championship Zonals is more popular than I would otherwise guess. The most recent message was from Rafael Santana of Caracas, Venezuela, who was confused by a crosstable on the page for Zonals 1963-1966 (C06). The heading for zone 7 reads,

followed by a crosstable for the Torremolinos 1962 tournament. To avoid any further confusion, he sent a crosstable for the real zone 7 qualifier of that cycle, Havana 1963, won by Perez of Cuba. For good measure, he also forwarded scanned clippings from news sources of that period. Here, for example, is a scan of Che Guevara watching a game from the tournament. The photo caption is the file name of the forwarded scan. 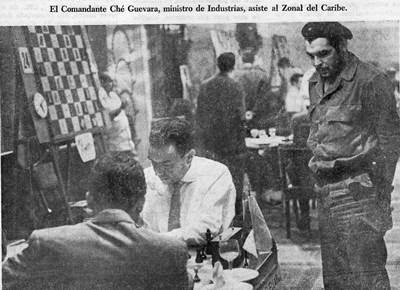 While adding the crosstable for Havana 1963 to my page, I started to wonder how the Torremolinos / Havana error first occurred. In my case, I documented the source of the information in a previous post on this blog: More Zonal Resources. Searching a little further, I found a Chessbase.com article from 2003: Two new CDs: historical and one instructional. It said,

How the Chessbase error arose is unknown. The article notes that the CD has its roots in 'Olaf Ulvestad: An American Original' by John Donaldson, but I can't see the well known IM and chess historian placing his subject in an invented zonal.

Just as winter follows summer by exactly two seasons (or is it summer follows winter?), so New Year's Day follows Christmas Day by exactly one week, and once again this World Championship Blog hosts my annual holiday message...

Posted by Mark Weeks at 9:52 AM No comments: