This month marks 20 years since I first uploaded my World Championship page for the 1862 London Tournament. How well has it withstood the test of time?

In last week's post, Acknowledging an Important Source, I noted the importance of Gelo's book 'Chess World Championships' as a reference for many of the pre-1883 pages on my site. The book is documented by a six-page bibliography including an entry for:-

A digital copy of the book is available online via a Google Books page, The Chess Congress of 1862, subtitled, 'A Collection of the Games played, and a Selection of the Problems sent in for Competition. To which is prefixed an Account of the Proceedings and a Memoir of the British Chess Association. By G. W. Medley'. This book is undoubtedly the source for much that is known about the event.

Wikipedia has a page, London 1862 chess tournament, that dates back to October 2008. Its source was London 5°Congresso Britannico, 16/6 - 2/8 1862 (archive.org // xoomer.alice.it). Both references use the same technique to indicate draws that were replayed, and neither shows which games were forfeits.

The most recent incarnation of the event is probably on the Zanchess blog: London 1862 – Preliminary results and xtabs (January 2016; 'There were 91 decisive games, of which 21 were forfeits; two decisive games are missing.'; see comments, esp. 'ckr') and London Chess Congress 1862 – a first-look look (February 2018). The forfeited games are not indicated here either.

If the forfeited games were handled as they are in modern times, Loewenthal's record in the event would be excluded. He scored +3-0 (+1F-9F) for a total of 10 forfeits out of 13 games.

Posted by Mark Weeks at 5:29 PM No comments:

The first point I want to tackle from my previous post, Small Projects for 2019, is:-

In December I received an email asking for clarification about certain points related to my page, 1862 London Tournament.

For reference, here's the link to the page: 1862 London Tournament (m-w.com). The essence of the email was the following exchange:-

Q: What was the source of your crosstable? Do the forfeited games [in the PGN file] indicate black forfeited all of them as the result indicates or is it just a listing of games not played? • A: The files you mention were created in January 1999. The source was Gelo's 'Chess World Championships 1834-1984' (McFarland 1988). The forfeits are indicated in the book without showing color; it was my choice to build the forfeit file by assigning the win to the first named player.

For further reference, the most recent edition of the book is available on Amazon.com, Chess World Championships by James H. Gelo, subtitled 'All the Games, All With Diagrams 1834-2004. Two Volume Set. 3rd Edition'. The copy I worked from 20 years ago was the 'Second printing, corrected (1995)'.

While I was researching the email, I realized that I had never acknowledged the source of my page for 1862 London. Here's a copy of the tournament crosstable given in Gelo's book (chapter 17), slightly reformatted.

This crosstable is more informative than mine, because it indicates all the draws and forfeits played in the tournament. I build all of my crosstables by collecting the games in PGN format, generating a crosstable from the PGN, and checking the generated crosstable against another source. The earliest events were checked against Gelo. I'll try to establish which ones in a follow-up post.

Posted by Mark Weeks at 5:14 PM No comments:

After two and a half months of blog posts about the latest World Championship events...

...it's time to move on to other topics. While I was watching those events, I developed a list of other ideas to cover as soon as time permitted. The last time I did this, Small Projects for 2018 (December 2017), it turned out to be a useful roadmap for preparing several subsequent posts. The first two of the actions on that 'Projects' post are still open:-

That first action is ongoing, while the second required permission to reuse published material. This permission was granted recently: 'If you'd like to quote my zonal material, that's fine.'

As for other projects, in December I received an email asking for clarification about certain points related to my page, 1862 London Tournament. While I was looking into the questions I realized that they were related to a recent post on my main blog, World Championships in London (November 2018). The history of the World Championship in the 1840s-1880s, a period spanning nearly 50 years, was centered on London. That important era deserves a closer look.

Another aspect of 'Championships in London' was the renewed interest for the English city in 1983, after lying dormant for exactly a century. That story deserves at least one post, perhaps more.

As part of preparing the first post of this current month, 2018 Women's World Championship PGN, I routinely 'added the names of all 64 players to the Index of Women Players'. While doing that I noticed several inconsistencies across the index and will address those as soon as I can. As for refreshes to existing material, I have to spend some time on:-

The first of those topics was last addressed in:-

The second was addressed in:-

If I manage to get all of that done, there's always a backlog in:-

That's my category for keeping track of follow-ups. There are currently 23 posts in the category, most of them non-trivial.

Posted by Mark Weeks at 5:33 PM No comments:

2018 FIDE Congress : Whither the World Championship?

For the tenth time -- the first was 2009 FIDE Executive Board : Whither the World Championship? (December 2009) and the most recent was 2017 FIDE Congress : Whither the World Championship? (November 2017) -- a 'Spectating' post on my main blog leads to a 'Whither' post on this blog. For the 'Spectating' post, see Spectating the 89th FIDE Congress (December 2018), and for the 'Whither' post, read on.

The rest of this post is based primarily on the minutes of the '89th FIDE Congress; General Assembly; Batumi, Georgia; 3-5 October 2018', which can be found via the 'Spectating' post. I normally start a 'Whither' post with the introductory speech of the FIDE President, but the 89th Congress was anything but normal:-

As the Congress was to include a FIDE election and Makropoulos was one of three candidates for president, I imagine he did this for political reasons. For veteran World Championship watchers like me, the most important question after 'Who will win the election?' is 'What is the situation with Agon?'. Another candidate for president also raised the issue:-

Mr. Short asked why the revised contract with Agon had not been publicized and was advised that it had been discussed and made public at the Antalya Executive Board meeting.

I couldn't recall having seen the contract and located a copy at Agon Agreement on Financial Obligations (chess24.com; PDF). It starts,

The heart of the document is a schedule of payments from World Chess to FIDE. The most important paragraph is a termination clause:-

9. It is agreed and fully accepted by World Chess that in case of the delay in performance of any of the above financial obligations by World Chess, the Promotion and Event Organization Agreement will be automatically terminated. However, a delay in payment for up to 7 (seven) days will not be considered a delay for the purpose of this agreement. In the event of the agreement being terminated in accordance with this clause, World Chess will propose to the sponsors to assign the relevant sponsorship contracts to FIDE.

As for the new FIDE management, the minutes of the 89th Congress later state,

6.6. Agon Limited. • It was agreed to refer this matter to the Presidential Board.

Another, later report, List of Decisions of Q4 2018 Presidential Board (fide.com; November 2018), says nothing about Agon or World Chess. The only other item in the minutes relevant to the World Championship was the report from the responsible commission (WCO):-

As I reported in FIDE Commissions 2018 (December 2018), the WCO appears to have been disbanded. Exactly what has replaced it is not entirely clear.

Posted by Mark Weeks at 5:42 PM No comments:

I added the PGN files to my page on the 2018 FIDE Knockout Matches, Women's World Championship (WWC), thereby completing the work from last week's post, 2018 WWC Crosstables. I also added the names of all 64 players to the Index of Women Players. Of these players, 46 had already competed in a previous WWC event and 18 were competing for the first time.

The official site has a composite image with photos for all 64 participants. A compact version is shown below. 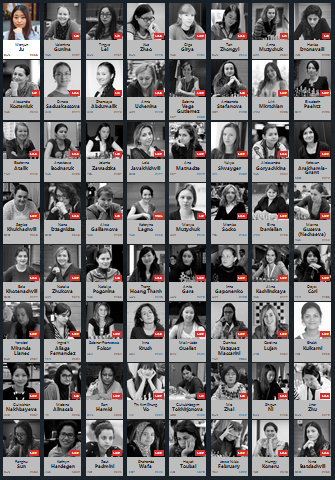 FIDE and the newly elected President, Mr. Arkady Dvorkovich, consider the development of women's chess to be one of their most important priorities. We believe that this goal can be achieved by increasing the number of elite tournaments for women and by establishing a coherent and logical system to the Women’s World Championship cycle. We are pleased to note that the first official steps in this direction have been taken

Posted by Mark Weeks at 5:07 PM No comments: