Spassky: 'The Dr. Zhivago of Chess'

In a recent post on my main blog, Sports Illustrated 'On the Cover', I showed that a prominent American sports magazine ('SI') once demonstrated a keen interest in chess. Through the series of Kasparov - Karpov clashes in the 1980s, SI had regular, multi-page features on top World Championship events. Here, for example, are the first two pages of a five-page spread on the Korchnoi - Spassky final in the 1976-78 Candidates Matches. 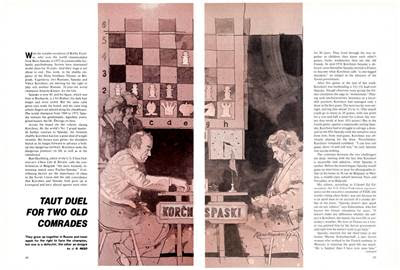 With the notable exception of Bobby Fischer, who won the world championship from Boris Spassky in 1972 in a memorable Icelandic psychodrama, Soviets have dominated world chess for 30 years. And their reign is not about to end. This week, in the shabby elegance of the Dom Sindikata Theater in Belgrade, Yugoslavia, two Russians, Spassky and Viktor Korchnoi, are meeting for the right to play still another Russian, 26-year-old world champion Anatoly Karpov, for the title.

Spassky is now 40, and his figure, which was trim in Reykjavik, is a bit fleshier, his dark hair longer and more styled. But the same calm green eyes study the board, and the same long artistic fingers are placed along his cheekbones. The world champion from 1969 to 1972, Spassky remains the gentlemanly, dignified, poetic grand master, the Dr. Zhivago of chess.

Across the board sits the volatile, daring Korchnoi, 46, the world's No. 2 grand master. In further contrast to Spassky, the formerly chubby Korchnoi has lost a great deal of weight recently. His brown eyes glitter, his shoulders hunch as he lunges forward to advance a bishop into dangerous territory. Korchnoi seeks the dangerous position -- in life as well as at the chessboard.

That's the sort of colorful sports reporting that is seldom seen outside of the mainstream press. Here is a list of all SI articles on the World Championship that I was able to locate.

The reports aren't always perfect. There is sometimes confusion between the concepts of 'game' and 'match' that is irksome to many chess fans, and the 1971 baseball analogy...

...is clearly an exaggeration. Even with those nitpicks, I'll gladly accept a slightly flawed report that promotes chess to a non-chess readership. For some reason, the World Championship reports stopped after the 1980s. Was it because of a changing perception of chess as a sport, because of the political turmoil in the chess world, or because of something else? I would really like to know.

Posted by Mark Weeks at 5:00 PM No comments:

The blog post originally scheduled for today has been postponed due to extreme heat. As a filler post, but fully deserving in its own right, here are photos of the first six Women's World Champions. 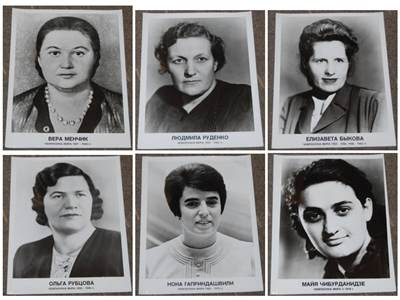 For more about the events in which they won their titles, see my index page World Chess Championship for Women. The photos were in a set that included the male world champions, Steinitz through Kasparov (although Capablanca is missing from the set I'm looking at), thereby dating their publication to no earlier than the mid-1980s. The description of the set said,

From the U.S.S.R. Ideal for framing and display in chess clubs and chess study rooms.

I'll be back in a week with the regularly scheduled post.

Posted by Mark Weeks at 5:18 PM No comments:

'Norway’s World Chess Champion Magnus Carlsen was disappointed when he was told, right after tying another match at the Norway Chess tournament now underway in Stavanger, that he won’t be able to defend his title on home turf next year. Oslo has been dumped as a potential host city for the next World Chess Championship, with its arranger and the Norwegian government arguing over the reason why.'

'Right now the culture differences are too massive. Norwegian bureaucracy and fastidiousness versus FIDE's and Agon's strictly-business approach and suspicious hesitation to show transparency. Stuck in the middle: Magnus Carlsen's dream of winning the World Chess Championship title where it all started. The dream of gathering the entire nation around chess -- because it would. Nothing could match the intense pressure, success, eventual lifting of the trophy, and singing the national anthem together with 100.000 Norwegians, showing him how proud he makes them.'

Posted by Mark Weeks at 5:16 PM No comments:

Continuing with my previous post, Zonal Qualifiers C01-C16 : Archive.org, I noted the first steps for documenting the interzonal qualification process in C01-C12:-

I downloaded the three [GMG] pages from Archive.org and combined the ten different regional tables into a single table. I then split that table into cycles covering C01 through C16.

The tables for each cycle contain data about individual players plus info about the qualification process. For example, the data on the 20 players in the first Interzonal is shown here:-

This should match my corresponding page on the 1948 Saltsjobaden Interzonal Tournament. Info about the qualification process for that same cycle is collected here:-

There is some overlap in cycles C13-C16. I'll decide how to handle that when I come back to the subject.