Let's have one last post on the 2012 Anand - Gelfand match. First, it gives me the opportunity to use (with permission) a couple of photos from Eric van Reem's unique record of the match from an insider's point of view.

Photos and captions from the Mate in Moscow blog: 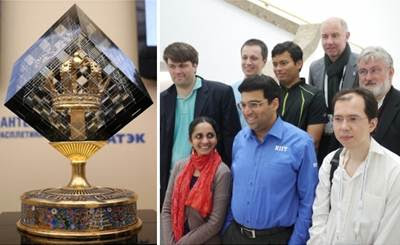 Left: The trophy; creator of the sculpture Andrey Molchanovsky. You can recognize the crown in the chessboard. The trophy is made of gold and bronze, the chessboard of optical glass. It weighs about 8 kg. • Right: Team Anand, Moscow 2012: Peter Heine Nielsen, Aruna Anand, Viswanathan Anand, Rustam Kasimdzahnov, Radek Wojtaszek, Surya Ganguly, Eric van Reem and Hans-Walter Schmitt.

Next, it gives me a place to tie together my various posts on the match. Posts marked '(*)' are from the my main blog Chess for All Ages.

Finally, it gives me a reason to analyze the spike in my visitor stats, as I did two years ago in Searching for Amand - Topalon.

The site gets more visitors every time a World Championship is held and I've often wondered where they come from. Since creating the simple database I described [in March 2010], I'm better equipped to do a detailed analysis.

Traffic to my site more than doubled during the duration of the match. Visitors to the page on the 2012 Anand - Gelfand match (linked above) exceeded those to the site's Index Page, which is normally the most visited page in any particular period. About 50% of the traffic came from Google, another 25% from my other pages, the index page in particular, and 5% from Yahoo and Bing each. The other 15% came from various sources. I was pleasantly surprised to see referrals from Wikipedia's page on the Tretyakov Gallery, the site of the match.

Another page that received far more traffic than usual was 1995 Kasparov - Anand PCA Title Match : Highlights. Most of the traffic came from searches on variations of 'Kasparov Anand', although Chessgames.com's page on Viswanathan Anand vs Garry Kasparov; World Championship Match 1995 (game nine) was also a significant source. Game nine was the first decisive game after eight straight draws in the 1995 match. I imagine that many of these visitors were wondering if the six initial draws of Anand - Gelfand were some sort of a record.

Posted by Mark Weeks at 5:23 PM No comments:

I added the crosstable and PGN game scores to my page on the 2012 Anand - Gelfand title match. Although I was impressed by the match organization (see Anand: 'This match could have gone either way'), I am less enthusiastic about the games themselves.

The greater the anticipation, the greater the letdown? There was so little content in the games at standard time control that most of them will be soon forgotten. Compared to the 2010 Anand - Topalov title match (see What a Match!), the 2012 edition left a lot to be desired.

Hyperdeveloped opening theory, powerful computers for further opening preparation, short matches, and draw offers -- all of these combined make for dreary chess. After the similar experience at the 2011 Candidates Event in Kazan something needs to change. Since the only element not dictated by circumstances is the draw offer, and since experience with the Sofia rules is positive, the way forward looks clear.

Posted by Mark Weeks at 5:21 PM No comments: