Catching up on Maintenance

No one, especially me, likes doing maintenance, but once in a while it's worthwhile taking the time to get various odds and ends out of the way. I changed the following pages (listed in reverse chronological order).

A few more maintenance items on my TODO list will have to wait until I can research certain details.

Posted by Mark Weeks at 3:03 PM No comments:

I added a first set of clippings for the cycle Zonals 1995-97 to my page on the Zonals. These were events that seeded players into the 1997 FIDE Knockout Matches at Groningen. In fact, these zonals were originally to have seeded players into a 1996 Interzonal, but the event was cancelled by FIDE and eventually replaced by the first knockout event, won by Anand.

Most of the first clippings were taken from Europe Echecs, and while they are little more than stubs listing the dates for the event and the names of the top finishers, they should be useful in locating full crosstables. Countries represented by the top finishers in zonal events usually receive better coverage in their national chess magazine(s).

Posted by Mark Weeks at 2:56 PM No comments:

Continuing with my two previous posts -- 2009 FIDE Executive Board : Whither the World Championship? and The Rise and Fall of FIDE's Global Chess, the following is again excerpted from the minutes of the 2009 Executive Board. It concerns discussions on the fate of Global Chess and on its successor.

[...] The FIDE President [Ilyumzhinov] took the floor and said during the discussion of Global Chess there was a very important issue raised about sponsorship in chess. During his report he did not touch upon this issue as he was talking about two other main problems: popularisation of chess and joining the Olympic movement. He was glad that this issue has been raised now. First, in fourteen years FIDE has not broken any of its commitments and all FIDE events have been organised for the chess community. We organise all the tournaments which we declare. All these years we have been trying to commercialise chess and find some other sponsors.

Today we recalled Mr. Campomanes who has done a lot for chess, using his own personal relations and connections, and who has brought a lot of investment and sponsorship into chess, including his own country for Karpov-Korchnoi match for example. And now he was continuing this tradition of Mr Campomanes by bringing in his personal friends and political connections among leaders of various countries. This allows FIDE to organise many chess events in respective venues. He had been also trying to create a system, which would be independent from him, which would not need the President and would create sponsorship and invest into chess. In order to create such a system, he had been investing from his own pocket into chess and this is his personal sponsorship of the chess movement.

For fourteen years FIDE has not taken any risk. He was the one who was risking with his own money. He was trying to find large scale business men who would invest into chess with him. The first effort was the creation of FIDE Commerce in London with Mr. Tarasov. We opened an office in London and we organised quite a few events. The expenses totalled to 4 mln USD, but this effort failed as FIDE Commerce did not bring any extra sponsorship. We closed FIDE Commerce and Mr. Tarasov still owes him around 500,000 USD.

Then we tried in Turin, after his personal discussion with Mr. Kok, where it was decided to create Global Chess, where 99,9% belonged to him and only one share belonged to Mr. Kok. He took the obligation to pay all the funds to Global Chess, in order for this company to attract other sponsors. He transferred the amount of 2 mln euro from his personal account to the account in Holland. We have all been witnessing the activities of this company. Global chess was supposed to find potential investors in Europe. He personally participated in negotiations with many companies, alongside Mr. Kok. As a result, we did not organise any tournaments in Amsterdam, Switzerland or Prague.

Therefore, as the main shareholder, he had decided to close Global Chess BV and he announced this officially at the Presidential Board meeting in Krakow. Nevertheless, he was grateful to Mr. Kok for his cooperation. He found it fruitful cooperation. He did not have any personal reservations against Mr. Kok. FIDE did not lose any money either, but it just cost him another 2 mln euro which he had spent for chess from his own pocket.

Mr. Ilyumzhinov said that as for the amount of 250,000 euro which was mentioned during the discussion [owed to FIDE by Global Chess], we should not forget the six Grand Prix tournaments, which have been organised for men, and four women's Grand Prix. This is additional revenue for FIDE from its share of the sponsorship. In addition there were stipends for principals and all FIDE members who participated in the tournaments. He thought that in two years Global Chess did a lot for popularisation of chess by opening new schools and bringing new personalities and new leaders of countries as friends of FIDE.

To date, there is no Global Chess Amsterdam and after his negotiations with his partners in the Arabic world, he had decided to open Global Chess in the UAE, in Dubai. In the summer he had transferred 150,000 euro there. There is money on the account of this organisation. He was transferring another 300,000 to this account by the end of the year. So the main shareholder is his partner and the President invests into it. As an organisation Global chess has no obligation as an investor. The only obligation is further development and popularisation of chess, which brings him moral satisfaction.

He hoped Global Chess would learn its lesson and will bring real sponsors into FIDE in the future. This will bring moral satisfaction and material things which we will see in the FIDE budget. He reiterated that he was risking another one million USD in order to try again to seek sponsors for chess. There is no risk for FIDE in this enterprise and let us hope that Global Chess will be working in the best possible way. Mr. Borg is appointed as General Director of Global Chess and will be working as hard as possible as well. [...]

Annex 62 is the Agreement of Shareholders of Chess News Corporation between Chess Lane SA and FIDE. Deputy President G. Makropoulos informed the Board on the negotiations between Chess Lane and FIDE, especially during the current FIDE Congress. [...]

Honorary Vice President Prof. K. Jungwirth said there is a list of FIDE events in schedule two, with World Championships etc, and in schedule three there is a clause to transfer exclusive commercial rights. He asked what will be the position of a Federation that will make an application for the organisation of such an event.

Mr. Makropoulos said the list is of the official FIDE events organised currently and Chess Lane is aware that the sponsorship for these events is the business of FIDE and that they cannot organise any of these events. If they come with a proposal for an event, they should present a business-plan to FIDE and FIDE will study it. He said that the main aim of Chess Lane is not to organise chess events but to generate business. There is a long list of rights in the agreement. Any agreed project must stipulate the rights to be acquired for that project and first there must be an approval of them by FIDE.

Women's World Champion A. Kosteniuk asked about exclusive commercial rights in respect of the broadcast of chess games.

Mr. Gelfer said that Board members, especially the Interface, know what is here. Maybe some of the Executive Board members do not know. He said the main difference between this contract and others is that we are used to the President giving and risking his own money for chess development. This contract is with someone whose main interest is to make business through chess. He is not interested in donating money to chess. Although he had been insisting that this contract cannot be signed without professional legal expertise, he can say now, with all necessary cautiousness that Messrs. Makropoulos and Freeman made an excellent job in protecting FIDE rights and avoiding any danger. They have been doing this for months already and other Board members joined them in the last few days during Congress. There are many ways to go out of the contract, to control the books and not to be responsible for anything. Messrs. Sand and Rivello joined the Committee today and raised some juridical questions. We have to be careful when signing for separate projects as this will involve creation of new companies.

Vice President W. Kelleher said he also had a lot of concerns when he first saw the contract. During the past couple of days all the concerns regarding liability of FIDE were addressed. FIDE is not in danger financially or legally. It is important to note that this contract is a structure. We have not seen a specific business plan, and we do not know how they are going to attract business. Mr. Kaplan is very confident that we can make money. In his view this is an open question. We did ask him to guarantee 100,000 USD for the first year. Mr. Kaplan declined to do this. He assumed he did it out of principle and out of confidence in his plans.

Mr. Buthali said he noted the assurances that the financial and legal side is fine. One fundamental aspect which was raised in comments is that FIDE is an institution and its integrity has been proved over the years. We have to be sure who we are dealing with. We need to know the profile of the person and we need to check the records.

Mr. Makropoulos said we have all the information about shareholders. We have a CV of Mr. Kaplan. He apologised for not giving out such details earlier. Concerning Mr. Kelleher's comments, the truth was that when we were insisting on a guarantee when signing the contract, Mr. Kaplan said 'we are partners, you put your rights, I put my money. We will make the profit and we will share this profit according to the contract'. If any project shall be rejected by FIDE, no money is paid by Mr Kaplan. In one year, if there are no projects, FIDE can terminate unilaterally. Mr. Kaplan has spent a lot of money during this period. He will present his projects. Mr. Kaplan is not like our President, he is not an altruist. This is our hope that we are facing a different situation. Also most of the real questions shall be faced, when an actual project is received. The Executive Board unanimously approved the agreement between Chess Lane and FIDE to form Chess News Corporation.

Annex 62 can be found by following the first link in this post.

The Rise and Fall of FIDE's Global Chess 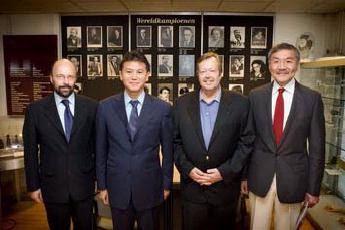 And then there was silence. How did the Global Chess objectives collapse so quickly?

Posted by Mark Weeks at 5:17 PM No comments: