A few months ago I received a message concerning my page 1975 Fischer forfeits to Karpov.

On your Fischer forfeits to Karpov page [link given above], you wrote, "The same rules governing World Championship matches had been in place since the 1949 FIDE Congress in Paris. They were confirmed at the 1974 Congress in Nice."

In Bozidar Kazic's article "Anatoly Karpov The New World Champion" in Chess Informant 19, he writes that "In September 1971, the FIDE Congress in Vancouver decided that ... the world title in 1975 will be played for 6 won games draws not counting." In 1972, Euwe reportedly tabled a proposal for a match of 30 games. At Helsinki, Fischer sent his 10 wins and 9-9 plan, and a commission was created to draw up rules. At Nice, Kazic has them adopting a match of 36 games where one could win ahead of schedule by scoring 10 wins.

Indeed, the referenced Informant has two-and-a-half pages titled 'An Outline of the Dispute Over the Unplayed Match' with a summary of FIDE actions between 1971 and 1975. While looking a bit more into the background of the 1975 match, I discovered the following table in a 1974 article titled 'The Historical Background' by Frank Skoff, President, USCF.

Although it might contain its own errors, it's a good summary of pre-WWII top-level matches and shows that Fischer's demands were not as outrageous as many of his critics declared.

Posted by Mark Weeks at 5:02 PM No comments:

While searching for Korchnoi images on my main blog -- e.g. Korchnoi's Defection and Composite Korchnoi -- I came across a couple of attractive postcards. 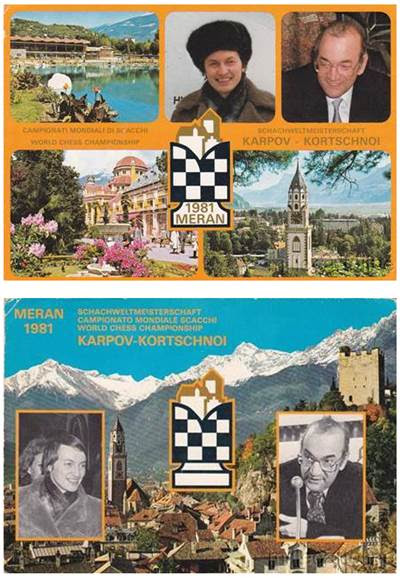 The event was the 1981 Karpov - Korchnoi Title Match; Merano, X-XI, 1981. Merano/Meran has multiple associations with chess; from Wikipedia's entry on Merano:-

Merano or Meran is a town and comune in South Tyrol, northern Italy. Generally best known for its spa resorts, it is located within a basin, surrounded by mountains standing up to 3,335 metres (10,942 feet) above sea level, at the entrance to the Passeier Valley and the Vinschgau. [...]

A chess opening, the Meran Variation of the Semi-Slav Defense, is named after the town, from its successful use by Akiba Rubinstein against Ernst Grünfeld during a tournament held in the town in 1924. In 1981, the World Chess Championship match between Anatoly Karpov and Victor Korchnoi was held in Meran. The first act of the musical Chess also has a world chess championship match set in Meran, and features a song entitled "Merano", which includes the line, "rosy-cheeked Merano, flourishing to a fault".

I have spotted many examples of the upper card on eBay, but the lower card is seen less frequently.

Posted by Mark Weeks at 5:39 PM No comments: