The Return of Chessdom News

Where have I seen that title before? Oh, yes, it was The Return of Chessdom News (May 2021), on my main blog. At the time I wrote,

In early 2019, Chessdom stopped being one of the 'go-to' sites for chess news and started limiting itself to specialty topics like news about TCEC. The last time I referenced Chessdom as a news source was over a year ago. [...] Chessdom.com TCEC S21 articles 'by Sergio' started appearing last month.

That observation turned out to be premature. There was a gap of ten months -- from May 2021 to March 2022 -- when there was no news about TCEC or, apparently, about anything else. There is a similar gap in my bookmarks for Chessdom.com.

In March 2022, the site suddenly came to life with a flood of reports, many related to the World Championship. Some reports were about the new cycle that starts next year:-

Unfortunately, Chessdom's use of tags to group related reports together looks like an afterthought rather than an integral tool for organizing the site. The first report in that list, about the 2023 Grand Swiss, has a tag named 'fide grad [sic] swiss 2022 [sic]'.

One tag that could be promising is All posts tagged "FIDE elections" (chessdom.com). There are currently only five reports under the tag, although announcements on the forthcoming election have been coming fast and furiously. A suivre...

Posted by Mark Weeks at 5:28 PM No comments:

Let's return to The Karjakin Affair (March 2022), where I wrote,

I added the FIDE announcement about GM Karjakin's ban to my page 2022 Candidates Tournament. Why is this important to the Candidates event, scheduled to start in June?

The answer to that question was because Karjakin had earlier qualified as one of the eight candidates to challenge Magnus Carlsen in the next title match. Earlier this week we learned that the Russian Karjakin had been replaced by the Chinese Ding Liren.

We learned not via a formal announcement on the FIDE site, but via a tweet on the world's largest chat room. Even then, Karjakin's replacement wasn't identified by name in the tweet, but by a photo with an embedded caption. 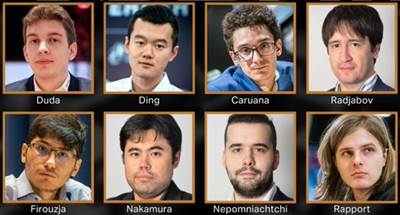 Mark your calendars! We are a month away from the start of the #FIDECandidates in Madrid, Spain... (twitter.com; 16 May 2022)

I hope we get a FIDE announcement so that I can add it to my page on the 2022 Candidates Tournament (m-w.com), due to start at Madrid in less than a month. I also hope they replace Karjakin's photo, which is still on what appears to be the official site for the tournament, FIDE World Championship. Cycle 2021-2023 (wcc.fide.com). I looked at that subdomain in my previous post on the cycle, 2022 Candidates; 2023(?) Title Match (May 2022), and nothing has changed since then.

So how did Ding Liren qualify for the second most important event in chess? He qualified by rating. The nitty-gritty was explained in two reports by Chess.com's Peter Doggers:-

As the comments to that second report testify, many chess fans aren't happy with the rating method of qualification, but rules are rules. Better to fix anomalies by updating the rules for the next time than to make stuff up as you go along.

Posted by Mark Weeks at 5:53 PM No comments:

A Giant Among GMs

GM Yuri Averbakh, the world’s oldest grandmaster, a trainer, international arbiter, chess composer, endgame theoretician, writer, historian, honorary member of FIDE, and the last living participant of the famous Zurich 1953 Candidates Tournament, has passed away, three months after turning 100. His death has been confirmed by the Russian Chess Federation and FIDE. Averbakh was one of the few strong players who managed to simultaneously reach significant heights in chess theory, literature, journalism, history, and chess politics.

Of the dozen photos of GM Averbakh in my eBay photo archive, this was my favorite. From an eBay auction in February 2012:- 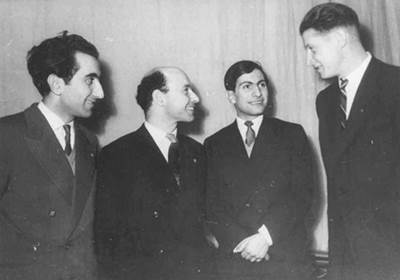 The photo pictures a former World Championship challenger (Bronstein) and two future World Champions (Tal, Petrosian). GM Averbakh competed in the 1952 Saltsjobaden Interzonal (5-8th/21), the 1953 Zurich Candidates (10th-11th/15), and the 1958 Portoroz Interzonal (7-11th/21) a half point behind the group that qualified for the 1959 Yugoslavia Candidates (all links m-w.com).

Averbakh has figured many times on this blog, as well as on my main blog, e.g. in these related posts:-

Many of the posts on my main blog were related to his contributions to endgame theory. This post is all Averbakh:-

In another post on that blog, Friendly Chess Players (July 2013), I mentioned,

Near the end of the book ['Centre-Stage and Behind the Scenes: A Personal Memoir'], GM Averbakh divides great players into six groups. Here are quotes from Averbakh describing each group [...]

Though Mr. Averbakh was talented, he said he knew he lacked the necessary qualities to become a world champion. In his autobiography, he wrote that great players fall into six categories: killers, fighters, sportsmen, people who like to play games, artists and explorers. All of the world champions came from the first four groups, he said. He put himself in the sixth category -- that of an explorer.

GM Averbakh was a World Champion chess explorer, possibly the greatest ever. Who else comes close?

Posted by Mark Weeks at 5:06 PM No comments:

The 2022 Candidates Tournament; Madrid, VI-VII (m-w.com) starts next month. I updated that page to include the latest announcements.

The eighth player is still unknown. A Fide.com subdomain that I had never seen before, FIDE World Championship. Cycle 2021-2023 (worldchampionshipcycle.fide.com), includes Sergey Karjakin as a participant, but with an asterisk against his name:-

World Cup runner-up; (* : Suspended by a decision of FIDE EDC. Subject to appeals.)

See a previous post on this blog, The Karjakin Affair (March 2022), for background. I could have written a companion post, 'The Ding Liren Affair', but decided that it was premature. See Ding Liren on his way to the Candidates (chessbase.com), for a different opinion. Instead of speculating on the eventual outcome, I'll just wait for FIDE's decision. It should come soon.

For a comprehensive explanation of the current status of the Candidates tournament and of the subsequent title match, see

Both pages are from Chess.com. The WCC title match is not yet listed on the FIDE calendar. Although the previous title match, 2021 Carlsen - Nepomniachtchi (m-w.com), was held at the end of last year in Dubai, it was originally scheduled for end-2020.

Posted by Mark Weeks at 5:31 PM No comments: