A year ago I set out to accomplish a number of Small Projects for 2014. It's totally out of character for me, but I actually accomplished all of them.

World Computer Championship: I wrote two posts on the topic.

The ICGA, responsible for organizing the events, hasn't kept up with the underlying technical evolution and their champions no longer include the strongest competitors in the world. Can they adapt?

World Correspondence Championship: With the exception of the 27th championship, which finished last year, the list in 'Small Projects 2014' remains the current status. No new events were started in 2014.

Zonals: After completing the tasks listed in 'Small Projects 2014', I wrapped them up with a second set of tasks.

Ditto for the second set, but the third set of tasks remains open.

As for 'Small Projects 2015', I have nothing beyond the tasks for the zonals.

Posted by Mark Weeks at 5:41 PM No comments:

At the beginning of the previous World Championship cycle (C26 according to my system of numbering the cycles), it was useful to put together a list of forthcoming FIDE qualifying events and related activities -- see 2013 a Zonal Year. For the current cycle, C27, the following table is taken from the FIDE Calendar 2015, plus events completed in 2014. For the history of previous cycles, C00-C26, see World Chess Championship Zonals.

(B) 1st Individual FIDE Zone 1.10 Championship (chessdom.com; January 2014; follow links for the tournament bulletin): 'The winner of the Zone Championship will be one of FIDE president nominations for FIDE World Cup 2015.'

Posted by Mark Weeks at 5:16 PM No comments:

'Happy to Take the Money'

In my previous post, Books on the Carlsen - Anand Matches, I mentioned the low ratings given by customer reviews for the Keene / Karlovich books. One comment on the book about the 2014 match baffled me:-

I am returning my two books. I bought one, and Amazon sent another when I said the first one was defective. Well, the second one was messed up, too. All of the chess diagrams in the second half of the text are complete nonsense, e.g. a diagram may have a black knight sitting on each light square: 24 black knights at once.

I couldn't imagine how that looked on the printed page. By coincidence, a few days later in 9046. Carlsen v Anand match book, Chesshistory.com reproduced a pair of pages from the same book. It boggles the mind that such a blatant series of errors could slip through the proofreading process. Then it struck me -- the book has never been proofread!

The Amazon 'Look Inside' feature (a real godsend for books like this one) offers many more examples of errors. See, for example, the following photo and caption from page 7.

'One it entitled to wonder...' 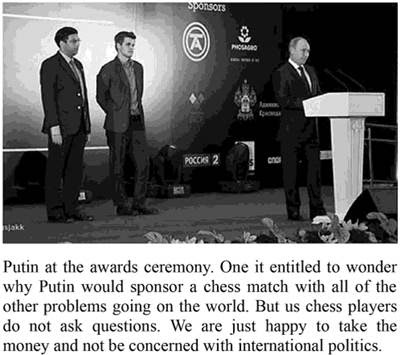 'Us chess players do not ask questions. [Us] are just happy to take the money...'. That pretty much sums up the philosophy behind this book.

Posted by Mark Weeks at 4:26 PM No comments:

Books on the Carlsen - Anand Matches

Anyone interested in a book on one or both of the Carlsen - Anand title matches? I imagine many people are, so let's take a look at what's available. Amazon.com currently lists five titles. I've grouped them here by author, with links to the corresponding Amazon pages.

Bookfinder.com lists only the Keene / Karlovich titles: Title is anand carlsen; Book is written in English. Why is that? The Müller and Edwards titles are listed on Amazon as 'Kindle Edition', implying that they are only available in digital format.

The two Keene / Karlovich works are both listed on Amazon as 'Publisher: Ishi Press'. I am extremely reluctant to buy anything published by that outfit, not just because the book on the 2013 match has two stars (out of five) based on three customer reviews, while the book on the 2014 match has one-and-a half stars on two reviews.

I already have one book by Ishi Press: ELISTA DIARIES: Karpov-Kamsky, Karpov-Anand, Anand Mexico City 2007 World Chess Championship Matches by Anatoly Karpov and Ron Henley; December 5, 2007. The Karpov / Henley writings, which make up the bulk of the book, are first rate, but the rest is not.

For example, the last page of the book discusses the following photo. The discussion is signed 'Sam Sloan'. 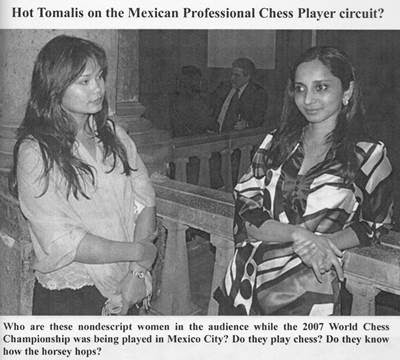 'Nondescript women'? Before reading Sloan's petty, sexist writeup, many players would recognize Arianne Caoili and Aruna Anand. They might also wonder what they have to do with the Karpov / Henley material. In a word, they have *nothing* to do with it.

Back to the Keene / Karlovich works, the name Raymond Keene also raises a red flag. I have a number of his books on title matches, which I listed in World Championship Bibliography. While I wouldn't mind buying another work in his series, other knowledgeable chess fans wouldn't go near them.

The names Ishi and Keene taken together convince me to keep my money in my wallet. Buyer beware.