I found the accompanying photo in the 1956 FIDE Review, p.7. It was used to illustrate an essay titled 'On the World Championship' by Botvinnik, although there was no mention in the essay of a possible Alekhine - Flohr match. 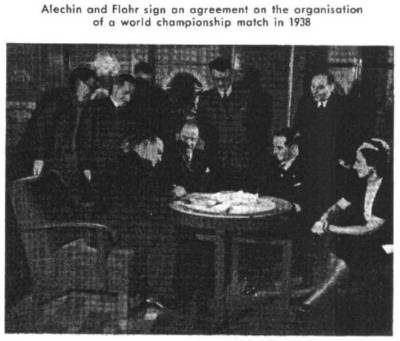 Flohr was nominated to be FIDE's choice as challenger to Alekhine at the FIDE Congress, Stockholm, August 1937. Since Hitler annexed Czechoslovakia in September 1938, dashing Flohr's hopes for a match, the photo must have been taken between those two events. The AVRO tournament, ostensibly to identify a challenger to Alekhine, was held in November 1938.

[The image is a scan of a photocopy. The crosshatch pattern was already visible on the photocopy. I doubt it was in the original document.]

Later: It occurred to me that another relevant milestone was the Alekhine - Euwe match, played October to December 1937. Alekhine was only in a position to sign for another title match after winning the Euwe match. Of course, FIDE might have extracted his signature before beating Euwe, although I don't see how they could have forced it.

In case anyone is wondering, that's Alekhine to the left of the table, signing the document. Flohr is to the right of the table. I believe that FIDE President Alexander Rueb is sitting between them. The fellow standing second from the left appears to be Marcel Berman, FIDE delegate from France. I'm assuming he was already active in FIDE at that time (I don't know for sure) and that the other standing figures were also FIDE officials.

Later: From Kasparov's Predecessors I on Alekhine (p.447):-

In May 1938 [Alekhine and Flohr] signed an agreement about a match in Prague, which was due to take place in the autumn of 1939 in various towns of Czechoslavakia. The prize fund was guaranteed by the well known footwear factory Tomas Bata. But in late September 1938 all the plans were disrupted by the notorious 'Munich agreement' allowing Hitler's Germany to seize from Czechoslavakia part of its territory, and also soon to occupy the entire country.