We are very happy to announce The College, a breath-taking historic building in the heart of London as the venue for the FIDE World Chess Championship Match 2018! The 10,000-square foot space in Holborn will host 400 people each day to see Magnus Carlsen defend his world title against US challenger Fabiano Caruana. The much-anticipated match will be held in London from 9th to 28th November.

The announcement carried an artist's conception of the playing area. It was too dark to see much, so I took its negative. 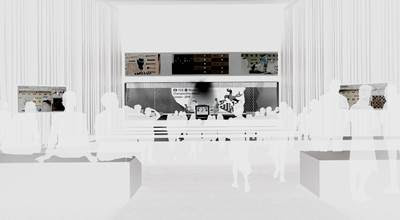 'Render of the playing hall at the College, Holborn'
[reverse black & white]

Before the announcement of the venue, the only other email communication from Worldchess.com was dated 17 June 2018; US President Will Meet the Challenger to the World Championship Title (If You Want Him To!):-

Chess fans from the [USA] contacted us with an idea: to petition Donald Trump to invite Fabiano Caruana, the challenger to the Title, to the White House before the World Chess Championship Match that takes place in London in November. They published a petition today in support of this proposal at the White House’ petitions page. According to the rules, if the petition is signed by over 100,000 in 30 days, the Administration will review and possibly grant it.

Signature Count • 847 signed, 100,000 goal // Closed Petition • This petition has been archived because it did not meet the signature requirements. It can no longer be signed.

Ilya Merenzon, the CEO of World Chess, backed Unibet as new partner: "World Chess is proud to announce this exclusive partnership with Unibet. We're enabling fans to be even closer to the action in this tantalising match. The tournament is the highlight of the chess calendar and millions of people around the world will follow every move."

Speaking of World Chess, whatever happened to their Grand Prix series, last seen in Palma de Mallorca, November 2017, according to my page 2017 Grand Prix. The FIDE calendar has nothing listed for 2019. Anyone taking bets on whether it will take place next year?